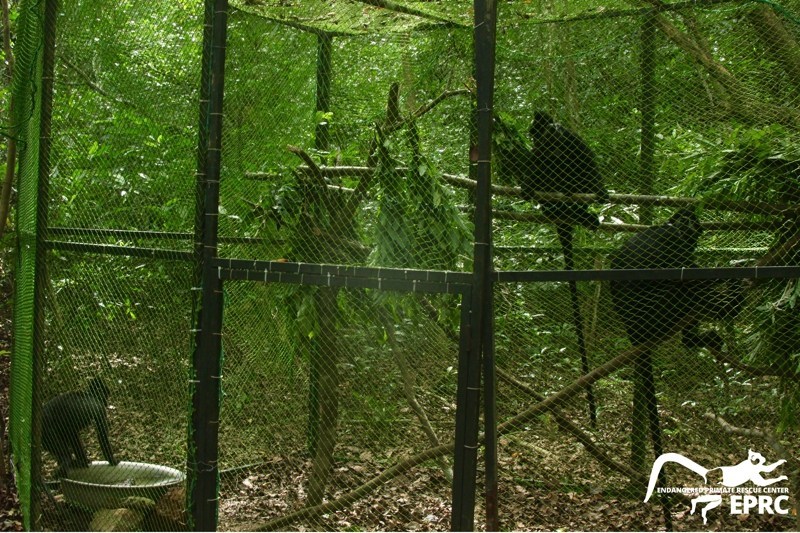 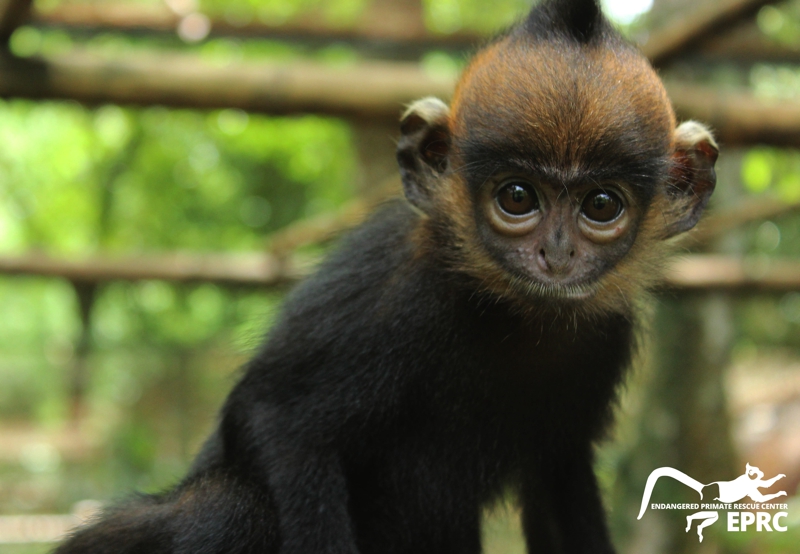 To prepare for this langur release, our primates have undergone three months of training in the semi-wild area in the EPRC. During this time, they were closely observed everyday by EPRC’s keepers so that we could assess their adaptability in a non-captive environment. The criteria for assessing candidates for a langur release range from the ability to move, to forage and to look for water to the overall fitness and health of the animal. In this case, the Hatinh langurs performed well in our semi-wild area and were expected to quickly adapt to the wild without much difficulties. 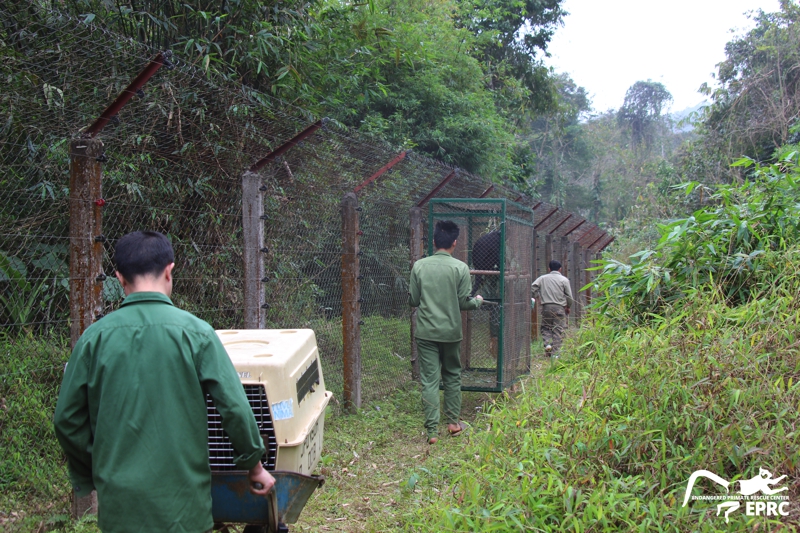 » Moving Hatinh langurs to semi-wild area to prepare them for release. 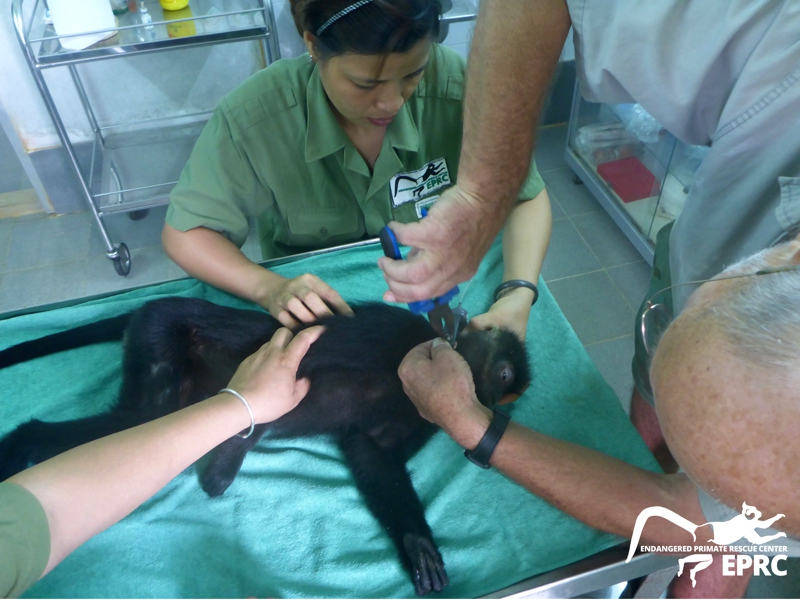 » Sometimes the langurs can get irritated with their new reluctant necklace.

If someone who can explain concisely the importance of tracking device in a langur release program, it should be Tuan from GreenViet, a biologist specialized in primates who have helped the EPRC to discover the release site.

Question: Why do we need to use these devices and monitor the location of our animals after release?

By monitoring them after release, we will know where the Hatinh langurs are, find out where they move to and whether or not they are still alive. It can also tell us if the animals are sick or injured or let us know any abnormality that can risk the safety of the animals. For example, if their status is stationary for more than a couple of days, we can start to speculate that they might be injured or sick, from then we can make prompt intervention if necessary.

After putting radio collars on the langurs, we proceeded to moving them from the EPRC to Ke Go Nature Reserve, which is a six-hour drive to home. The plan was to put them in a temporary cage in the release site for one day before actually setting them free. This was thought to give the langurs a decent amount of time to adjust to a completely new surrounding, and give us a chance to observe their behavior one last time before release.

It was midnight when we arrived at Ke Go and the langurs were quietly sound asleep. How could they sleep when freedom was only hours away? If it were me, I would have plotted exciting plans to venture into the evergreen forest ahead. They are langurs born to rescued victims of illegal wildlife trade, and now the pressure to not only survive in the wild, but also to produce a healthy and populous new generation is on them. 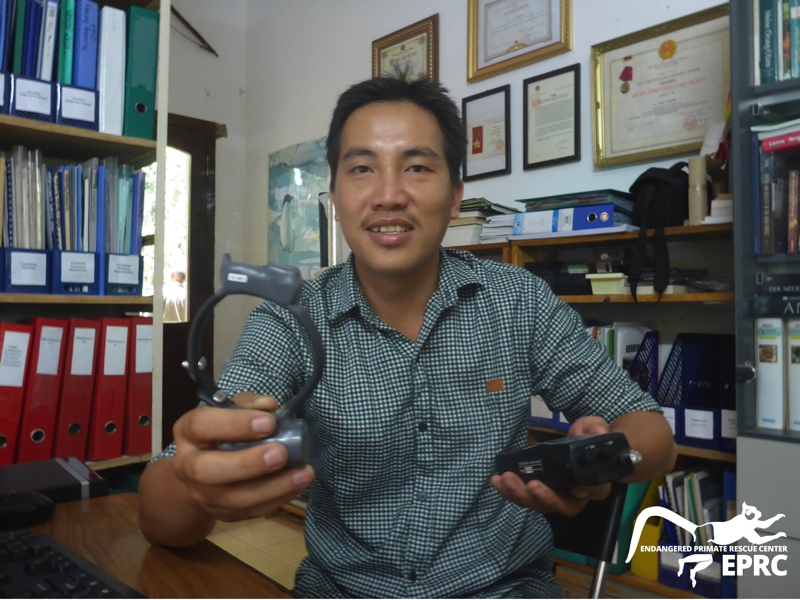 » Tuan is checking on the tracking device one last time before putting them on the langurs. 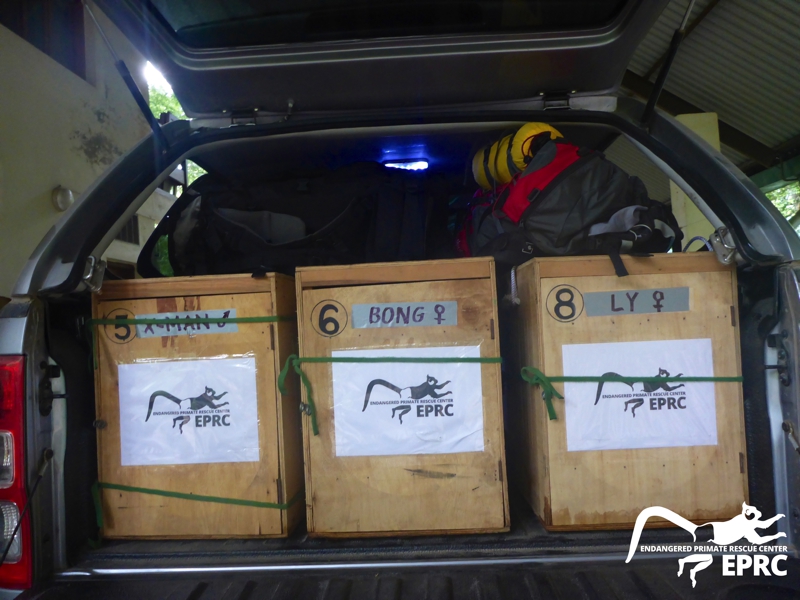 » Each box is provided with fresh leaves to avoid empty bellies. 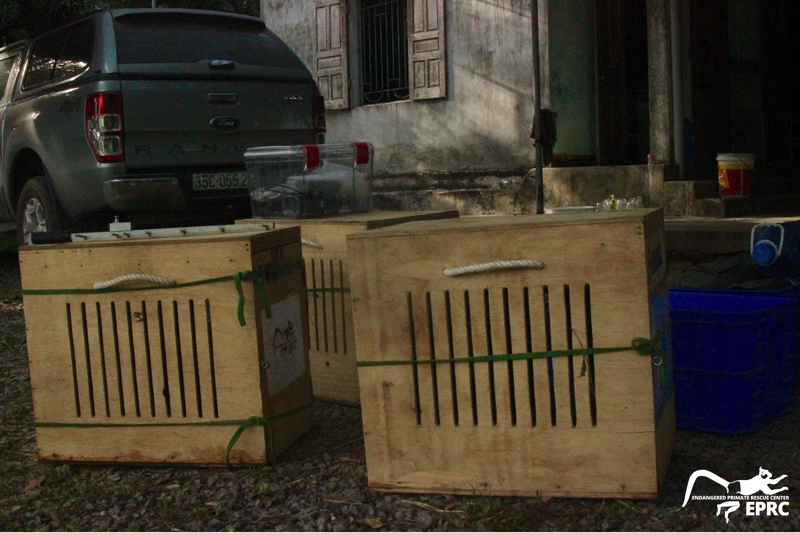 » Freedom was only hours away from our langurs after years living in captivity. 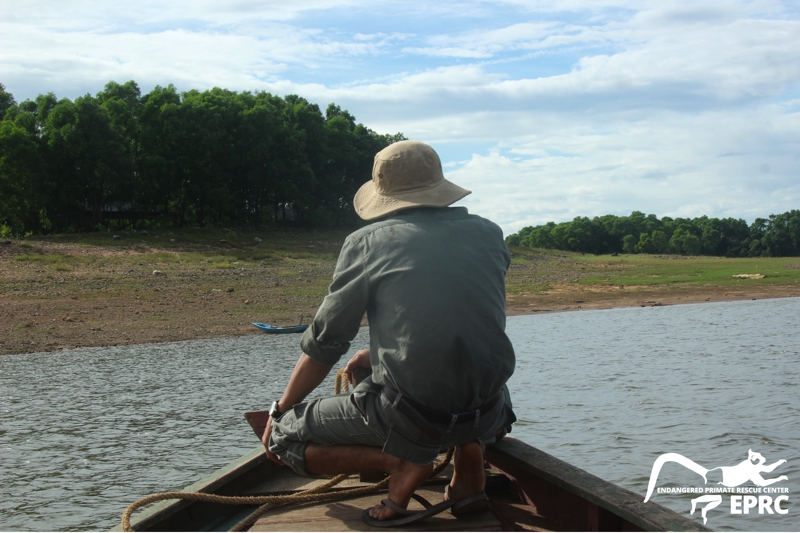 » The peninsula finally appeared in front of our eyes after half-an-hour boat ride. 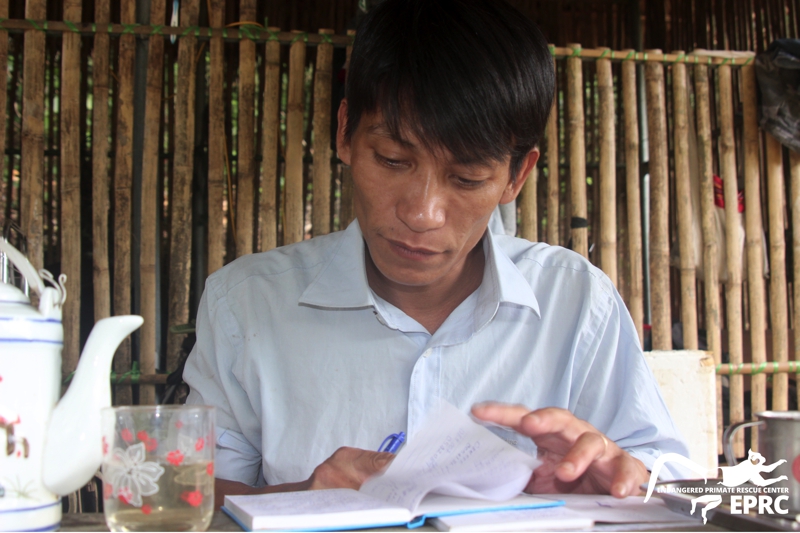 » Toan is a field researcher from GreenViet who will collect samples of the vegetation that the langurs eat to have a better insight into their diet.

Let’s meet Toan, a field researcher from GreenViet who’s specialized in flora. He can explain why the type of vegetation that grows in this peninsula needs to be put in thorough consideration before release.

Question: Why do we need to know what kind of vegetation grows in this peninsula?

Langurs have a range of diet consisting of certain food that they eat and to find out whether or not this release site can provide them with suitable leaves is essential. Before we brought them here, I’d already conducted field research in the peninsula and confirmed that the vegetation in the peninsula is appropriate for these Hatinh langurs. After release, I will continue to monitor them and keep on collecting vegetation samples to have a better insight into their diet.

Our anticipation was built to the fullest throughout the half-an-hour boat ride to the peninsula. And as soon as the boat anchored, we hurried to the release site without any delay.

Our hands were busy with water buckets, leaves, backpacks and not any less important…cakes. The rangers were quick to set up a simple spiritual ceremony that has existed for centuries. They prepared humble items as gifts and burned incense to inform the spirits who guard this piece of land about the arrival of our animals and ask for their permission.

After Nadler was done with tying leaves up to the tree branch inside the cage, which is no unfamiliar task to him after running the EPRC for more than 20 years, we opened the sleeping boxes and let the langurs feel fresh air running through their nostrils. They immediately dashed out of the box and climbed to the branch, curiously glanced around and started to drink and eat a few seconds later. They had been staying in a small sleeping box for many hours. 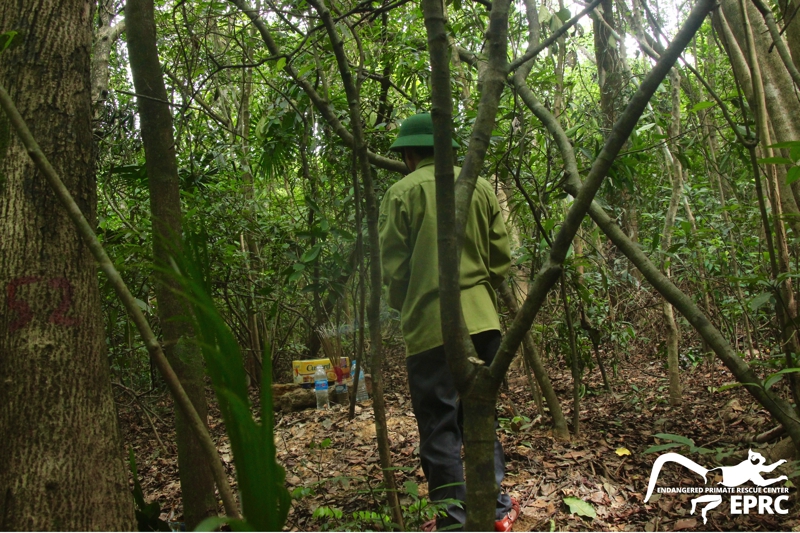 » Traditional spiritual ceremony is indispensable and compulsory even to langurs. 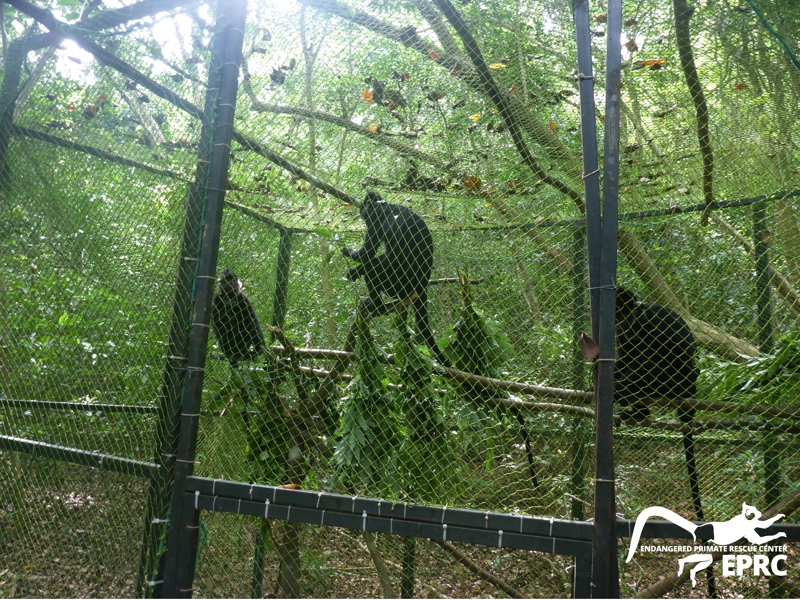 » The langurs were supposed stay in this cage for one day before truly be free. 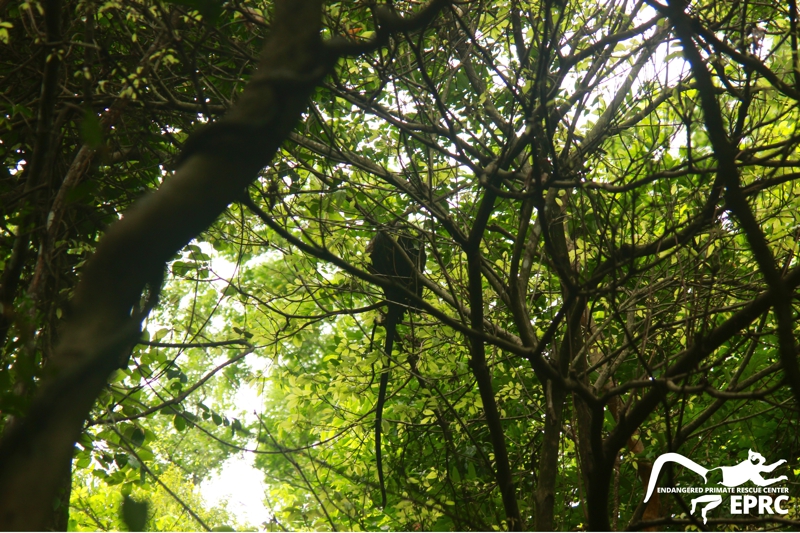 » The langurs’ great confidence in moving between tree branches not only reassured us but reinforced our trust in their adaptability.

» Water will be carried from the lake to the release site everyday to provide langurs with a easy source of water for the first couple of weeks. 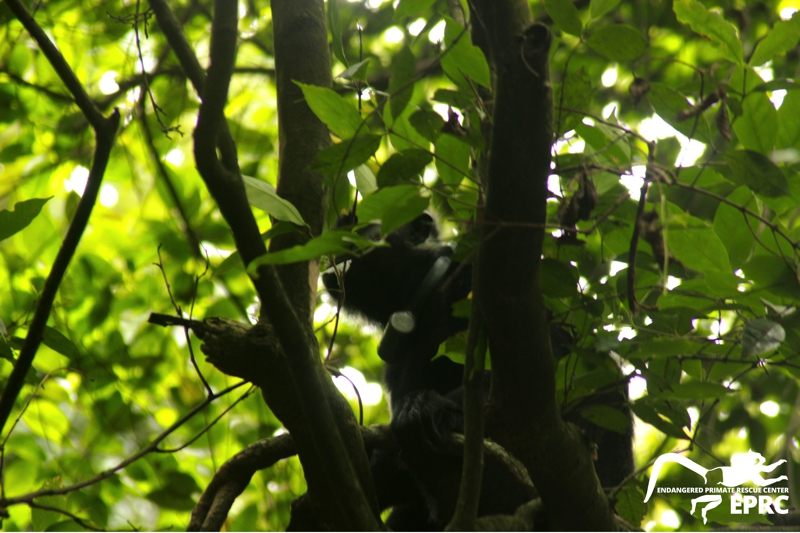 » Langurs can be very elusive once they’re released. In fact, this is a good sign when it comes to hiding from dangers.

For now, we could let them be and would routinely come back to check on the langurs every one hour. However… something unexpected happened. Unfortunately, the langurs were able to somehow find a hole in the net and broke free after a few hours. Although this surprise might have diverted from the initial plan, it didn’t sabotage the release in any way. The langurs were simply desperate to have their first taste of complete freedom earlier than expected.

Our next patrols saw them roaming near the original release site due to a prepared source of water nearby. But it’s a peninsula and the source of water is very close by, why do we need to provide them water? Can’t they manage themselves? As explained by Mr. Nadler, for the first couple of weeks, we have to aid the langurs with a source of water forthe peninsula still remains an obscurity to them. As a result, our researchers will supply them with daily water, placing it in different locales to stimulate the langurs to roam a wider territory.

According to Nadler, this langur release can only be considered as a success after one year of monitoring. If the animals continue to stay safe, fit and healthyfor the next 12 months, they will be absolutely ready to live without our supervision. However, ultimately, this release program only truly bears fruit once the langurs start to reproduce. But for now, it’s a good start.

Hatinh langurs were originally found in a location in Hatinh province which has been merged to Quang Binh province. This langur release program is proudly received by Hatinh delegates who deem the animals as children coming back home. 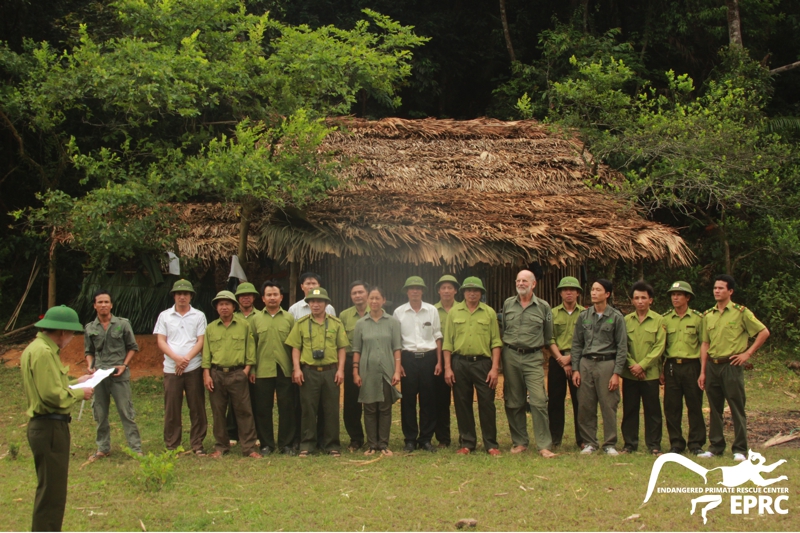 After release, the EPRC continues to work together with field-based researchers to keep a close eye on our wild langurs. With 25 native species found, Vietnam tops the biodiversity of primate in Southeast Asian mainland. However, according to IUCN Red List, 90% of primate species in Vietnam under threat of extinction including seven critically endangered species and ten endangered species. This langur release being carried out successfully will shed new light on the future of the primates in Vietnam.